Firstly, it is unbalanced, being under significant strain at peak times and underused in off-peak periods. Secondly, fares do not rectify the imbalance, encourage the best use of the public transport system or provide public transport users with options that vary with price. Finally, current fares are not fair.

Our report Good Move: Fixing Transport Congestion outlined a comprehensive transport network pricing system across all roads, public transport and parking to reduce growing congestion and crowding on Victoria’s roads and public transport, as well as getting more out of our transport system.

While such reform would take time to develop and implement, public transport is already priced, so fare reforms could be considered by the Victorian Government in the shorter term.

Fare reform would take the first steps towards achieving the goals of transport network pricing, while also addressing the problems facing Victoria’s public transport system. Some immediate fare changes can also contribute to managing the COVID-19 pandemic by helping to achieve social distancing on public transport in Melbourne and improving the health and safety of commuters.

Problem 1: The public transport system is under strain and out of balance

Under normal pre-COVID-19 conditions, the public transport system is both overcrowded and underused. At times of peak use, passengers are crammed on services or unable to board full trains and trams. Reliability suffers as timing or mechanical issues have large flowon effects on the congested network, resulting in high rates of re-routed and late-running services.

Outside the peak times, the network is underused. Buses, trains and trams sit idle in holding yards waiting for the peak periods. On weekends, public transport use is only 41% of its weekday use while roads are congested. At these times, moving any road trips to public transport would have significant benefits.

Overcrowding and underuse vary not just by time of day, but also mode. Many metropolitan bus routes have excess capacity, particularly those in the outer suburbs. Modelling undertaken for Infrastructure Victoria estimates that 70% of bus routes run at below a third of their capacity during the AM peak.[2] 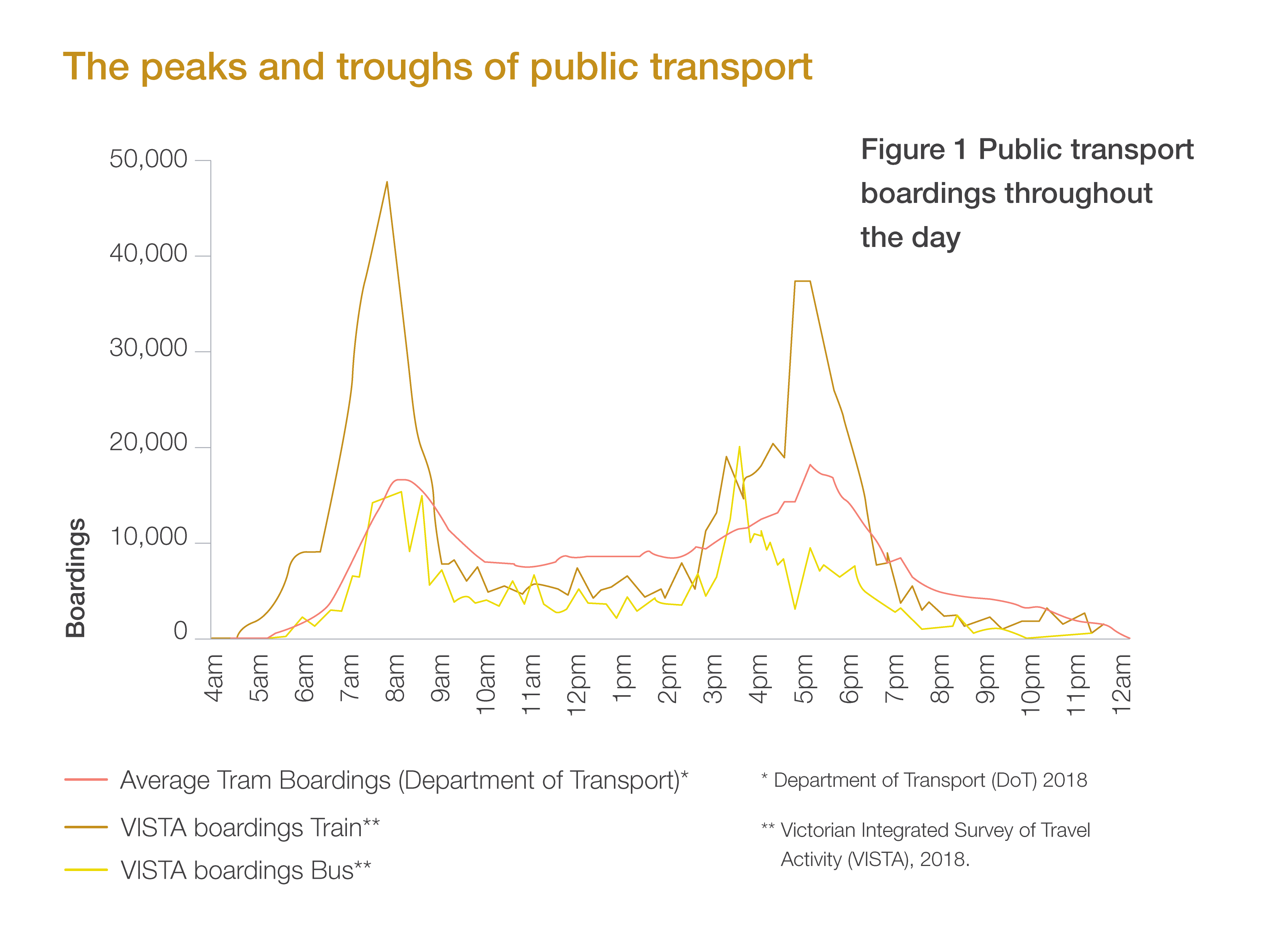 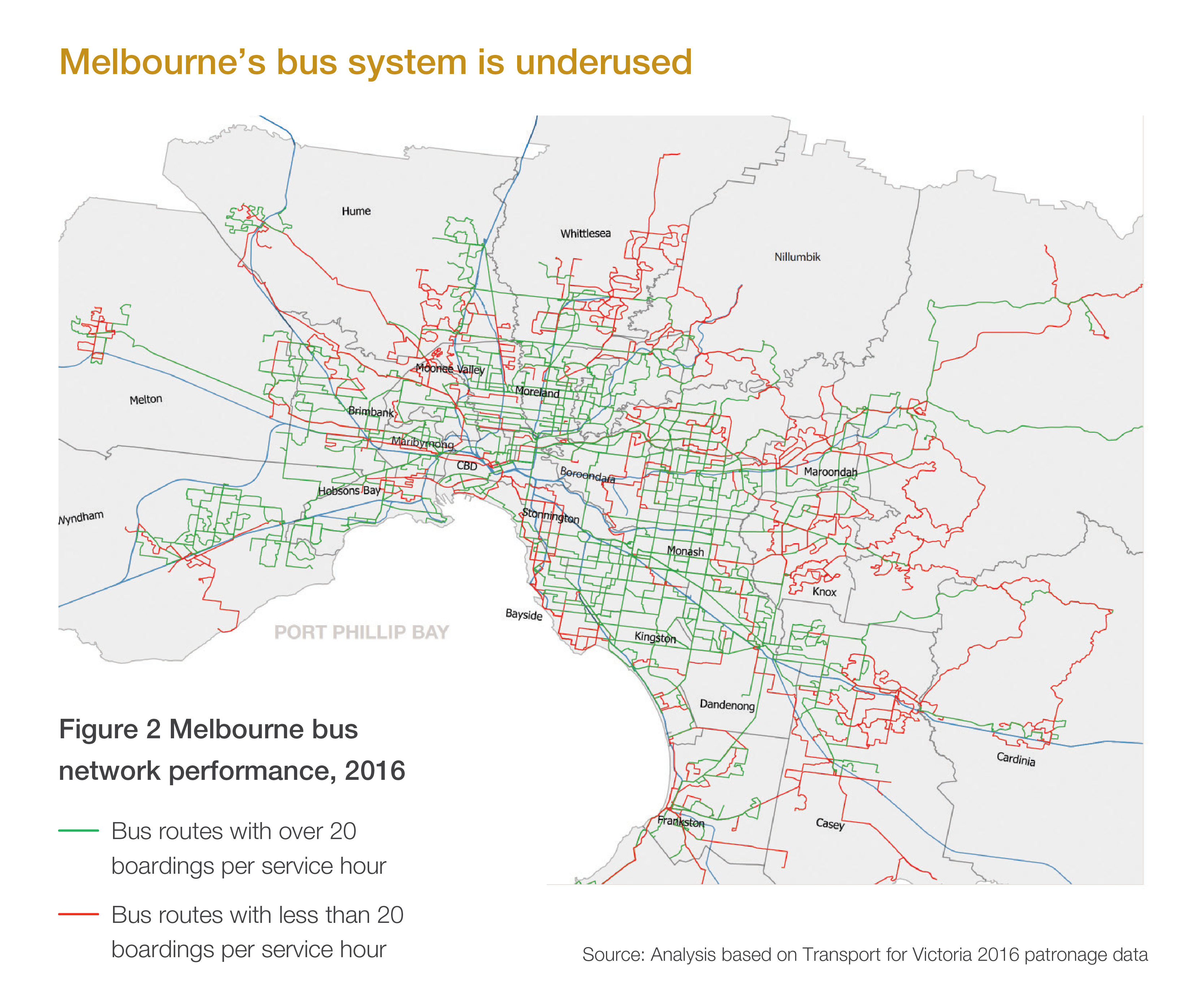 Problem 2: Fare setting objectives are not clearly defined, fares neither encourage the best use of the system nor provide choice

Despite the overcrowding and underuse imbalance of the public transport network, fares currently play a very minor role in trying to rebalance the system or in providing people with greater choice.

People who are conducting casual trips around Melbourne face the same price all day as those travelling for time-critical business at peak hours. The only exception is the Early Bird discount for train travel.

There is little-to-no price incentive for those using public transport for non-time critical trips to travel outside the peak. Worse, someone who may wish to use public transport for social or shopping purposes, but who value the trip at less than the current fare, will stay home or drive ­– even though the trip could be provided for a low cost due to spare capacity in the off-peak periods.

There are two ways in which the current metropolitan fares system doesn’t help to reduce imbalances across the network or provide choice: first, in its structure; and second, in the values applied in setting fares.

Currently, the fare structure of the public transport network is relatively flat. The price for metropolitan fares is $4.50 for a two-hour ticket regardless of whether a person is travelling in busy times or quiet times and regardless of mode, distance or trip purpose. Zone 2 provides cheaper fares for travel solely within that zone.

This structure provides little variation in recognising the different costs and benefits that different trips have. The flat price means that some trips are overpriced, while others are under-priced. This results in too many trips taken at some times and on some modes, while too few trips are taking place at other times and on other modes. As an example, short trips to the local shops via bus are priced the same as long commutes to the CBD at peak time via train, failing to reflect either the value to the user or the cost to government in providing the trip.

The objectives for fare setting are currently not clearly articulated. In general, fares have been set to encourage public transport use, but charging a mostly flat fare has likely increased the use of the most popular modes at the most popular times rather than encouraged use across all modes throughout the day.

Some trips are overpriced, others are under-priced and there is little-to-no price incentive to travel outside the peak periods.

The issue of equity is currently addressed in the fares system through concessions. Concessions provide a partial solution to the issue but miss out on the very significant benefits that can be provided by variation in fares − and not just discounts on a flat rate.

While there is a perception that public transport is used by or provided for a greater number of users on lower incomes, this is not actually the case. On average, those using public transport have household incomes 8% higher than those who don’t. Those in the top 20% of income earners (the top quintile of equivalised household income) make up a disproportionate number of public transport users, and make up the largest group of public transport users overall.[3] However, as shown in Figure 3, different modes are used by different income groups to different degrees: while trains and tram have higher rates of high income users overall, buses are disproportionally used by those on low incomes – and significantly so. 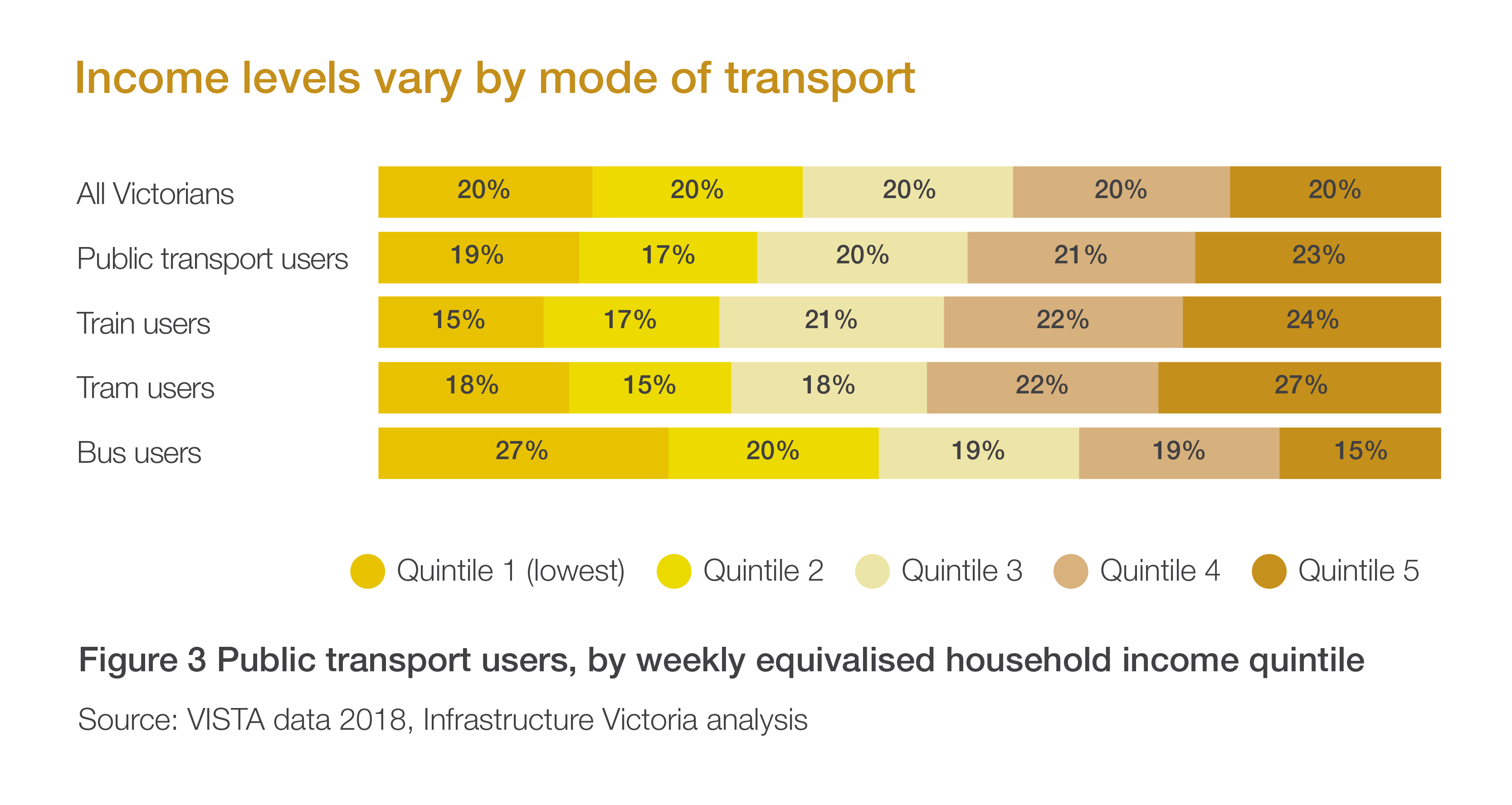 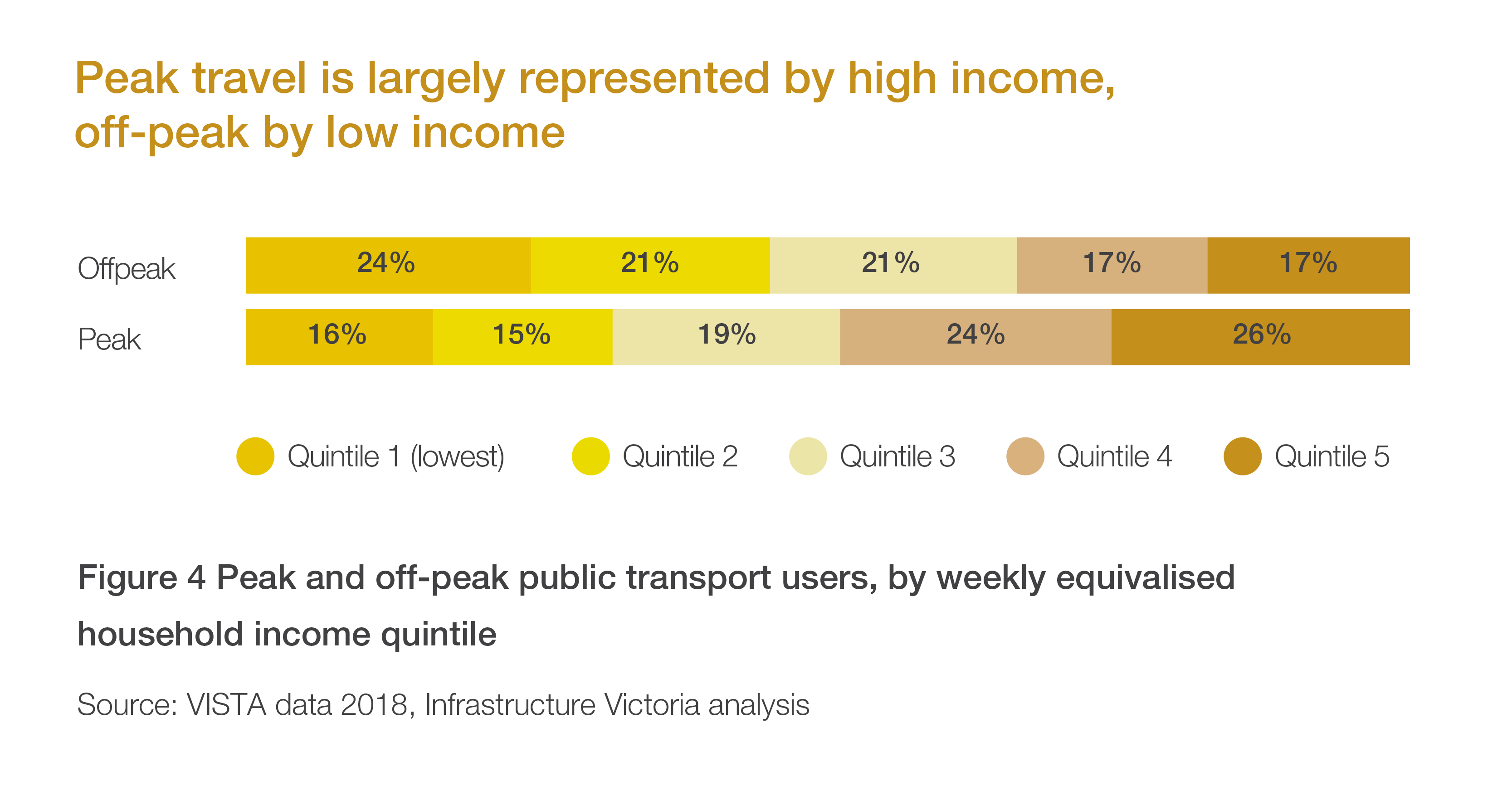 Given these patterns of use, it is very clear that prices that vary by mode and time of day may provide significant benefits to low income Victorians, above and beyond those provided by concessions.

For example, making bus fares cheaper than train fares would provide more extensive benefits to low income earners, as almost half of bus users are in households in the bottom 40% of incomes (Figure 4). Making off-peak fares cheaper would similarly benefit low income households. Low income earners make up 45% of those travelling off-peak and less than one third of those travelling in peak.