Victoria’s transport network is struggling to meet demand, with congested roads and crowded public transport. Our population is projected to grow bigger and faster, so the pressures on our transport system will only get worse.

There needs to be a change to the way Victorians use the transport system if we want to reduce congestion and get the most out of our big infrastructure projects. A change to transport pricing will motivate and incentivise people to make that change. This was one of the top recommendations in Victoria’s 30-year Infrastructure Strategy in 2016 and has been a key focus of our research program over the past four years.

Our research has now evolved considerably with the inputs of enhanced modelling, international case studies and direct access to community opinion.

It is now clear that the community is open to changing their travel behaviour. For the first time, Victorians have identified the conditions under which they would do so. These conditions are practical, fair, easy to implement and give unprecedented opportunity to make a change.

Our work also shows that network-wide change to the pricing of roads, public transport and parking is required to motivate the community to change their behaviour to get the most out of our current transport system, as well as investment in new infrastructure projects.

Transport network pricing means a shift away from traditional thinking. We need to replace fixed upfront charges (such as registration) and uniform fares with flexible charging according to time of day, mode and location to drive behaviour change. If we make this change, it can be accepted by the community and provide an effective reduction in congestion.

The community’s views are amplified throughout industry with an increasing chorus of voices calling for change. Community support, economic evidence and the calls for reform from industry show that the time to start changing the way we pay for transport is now.

There are three big problems with our current transport pricing system – problems that can all be addressed if we change the way we pay and change the way we travel. This paper explores the problems, the solution, the community view and options for government on the pathway to change.

The first problem is congestion and overcrowding on public transport mean longer and more variable travel times, resulting in frustration and lost productivity. With transport network pricing, our work shows average speeds in inner Melbourne during the morning peak are around one third faster.

Secondly, we know that the accepted solution of building new roads and expanding transport services is necessary, but not enough to fix congestion.

To make the most of existing and new assets and services we need a complementary pricing system with inbuilt flexibility around time and mode of travel. This is validated by community sentiment, with one in four people saying they could change the time or mode of travel. What we need to do is incentivise them to make that change.

The third problem is that there is no incentive for people to change their behaviour. If they did change, the whole network would benefit – congestion would be reduced, all modes of transport would be fully utilised and demand would be spread throughout the day not just during the peaks. Currently, pricing doesn’t consider the mode or the distance travelled, meaning many people pay more even though they don’t travel far or often. It’s unfair and doesn’t get the most out of the transport system.

This paper explores an illustrative approach to changing Victorians’ travel behaviour through various pricing scenarios across roads, public transport and parking. Our approach is not intended to provide a definitive prescription of what pricing changes should be. We expect that further refinements would be made to the pricing model before it is implemented.

What our approach clearly shows is that under all the illustrative scenarios, most Victorians are better off in terms of price and choice and driving conditions also improve.

In a scenario that includes concessions and additional subsidies to make sure the system is fair, up to 85% of people could pay less for transport.

For those who pay a little more because they continue to drive long distances, their travel time will be faster and more predictable. People can make their own decisions and balance what is most important to them – mode, time, distance or cost.

We’ve taken an illustrative approach and looked at a number of different options for change. Like the community, we think the best model will include discounts and concessions for the vulnerable and disadvantaged. Even with these concessions and some additional Government subsidies for public transport, these costs are offset by a more efficient and better utilised transport system.

The best approach will start from congestion busting, not revenue raising.

This is what our work shows and international experience validates.

We know long-term sustainable change is not easy, so we’ve identified a number of options for the Victorian Government to consider starting.

Some can be done right now – such as reviewing and trialling variations in public transport fares across all modes of transport.

We also support the introduction of distance-based pricing for electric vehicles, with the proviso that the significant health and environmental benefits of electric vehicles are considered as part of any reform.

Government could also increase and extend the parking levy to include Windsor, South Yarra, Richmond and Prahran. It could conduct a full-scale trial of cordon charging in inner Melbourne and other congestion hot spots.

Other options are explored further in this paper.

We think that planning for change should begin now in order to reap the benefits of changed behaviour and avoid unnecessary costs. Planning for change also gives people greater certainty, so they can make choices about where they live and what are the most efficient and cost-effective ways to travel around our city.

Ultimately we need to make the most of what we have. Governments have invested heavily in our transport system, providing more choices and more services. We need to now complement that with network-wide transport pricing reform because it is necessary, effective and fair and motivates a willing community to change the way they travel.

Transport network pricing by the numbers 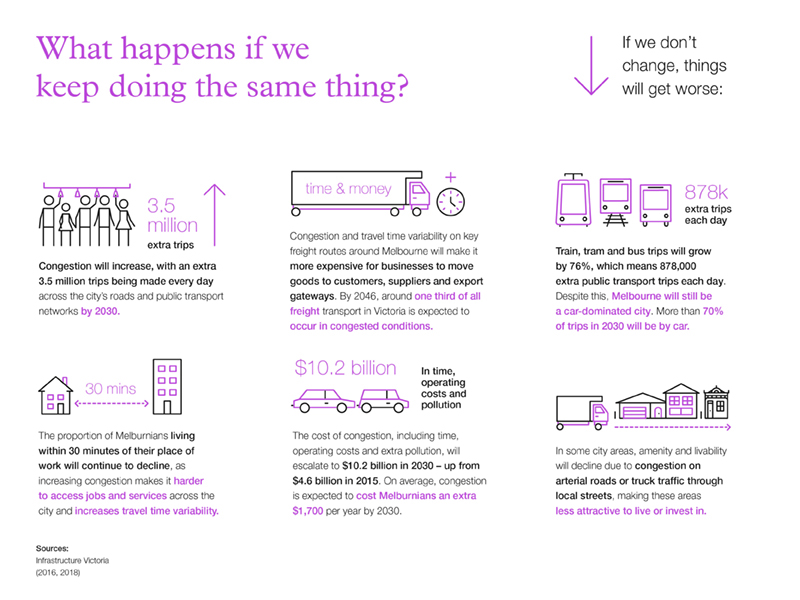 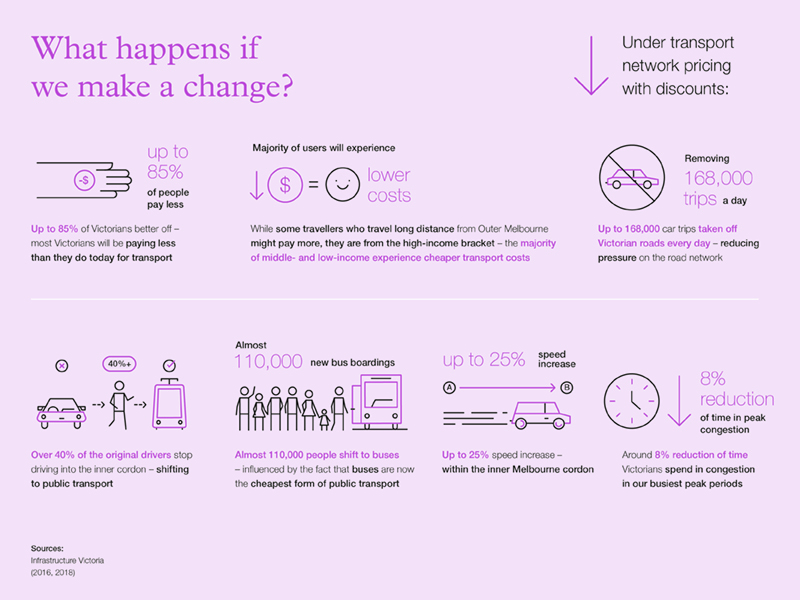 Infrastructure Victoria has identified a range of options for the Victorian Government to consider ahead of network-wide transport pricing reform. These options allow Government to test, validate and refine new ways to pay for transport to ensure it is efficient and fair, addresses congestion, helps manage demand and gets the most out of our transport system.

03. Conduct a randomised control trial of a large sample of motorists including different types of road pricing options targeting congestion across Melbourne

06. Conduct a full-scale trial of cordon charging in inner Melbourne and other congestion hot spots

07. Price the use of all roads in the Melbourne Metropolitan area

10. Trial dynamic pricing for a selection of new and existing carparks at railway stations and park and rides

11. Apply dynamic pricing to all on-street and council controlled parking with prices set to target a certain number of places remaining vacant at all time.

12. Apply dynamic pricing to all parking at all railway station and park and ride carparks