3. How people pay around the world

Transport pricing reforms have been successfully implemented in major global cities like Stockholm, Milan, London and Singapore. How other cities have proceeded with this reform gives some guidance about how transport network pricing could be designed and implemented in Victoria. We summarise these reforms in Table 1 below.[3]

For road pricing and parking prices, all of the reforms that have been adopted at scale are location-based (London, Melbourne, Milan, San Francisco, Singapore and Stockholm).

In each of these places, congestion was a major issue. But not all the proposed location-based pricing reforms have been implemented. For example, cordon schemes in Edinburgh and Manchester were rejected in referendums.

A second design feature of road pricing reforms is that either a cordon was placed around the congested areas or – as in London – area charging was used.[4]

People were charged for entering the cordon during peak times but not during the off-peak. In London and Stockholm, there were some exemptions.[5] On the I-95 Highway in Florida, congestion pricing is applied to some of the lanes, called `HOT’ lanes.

A third feature, seen in London and Stockholm, is that additional public transport was provided to accompany the introduction of pricing, even though in both of these cities the relevant areas already enjoyed relatively good public transport.

Only two non-location specific road pricing schemes have been proposed and neither fully implemented. In Oregon, state-wide distance-based charging was introduced as a pilot but has not yet progressed substantially. Nationwide road pricing in the Netherlands was proposed but dropped before it could be implemented after a change of government (D’Artagnan Consulting, 2018). 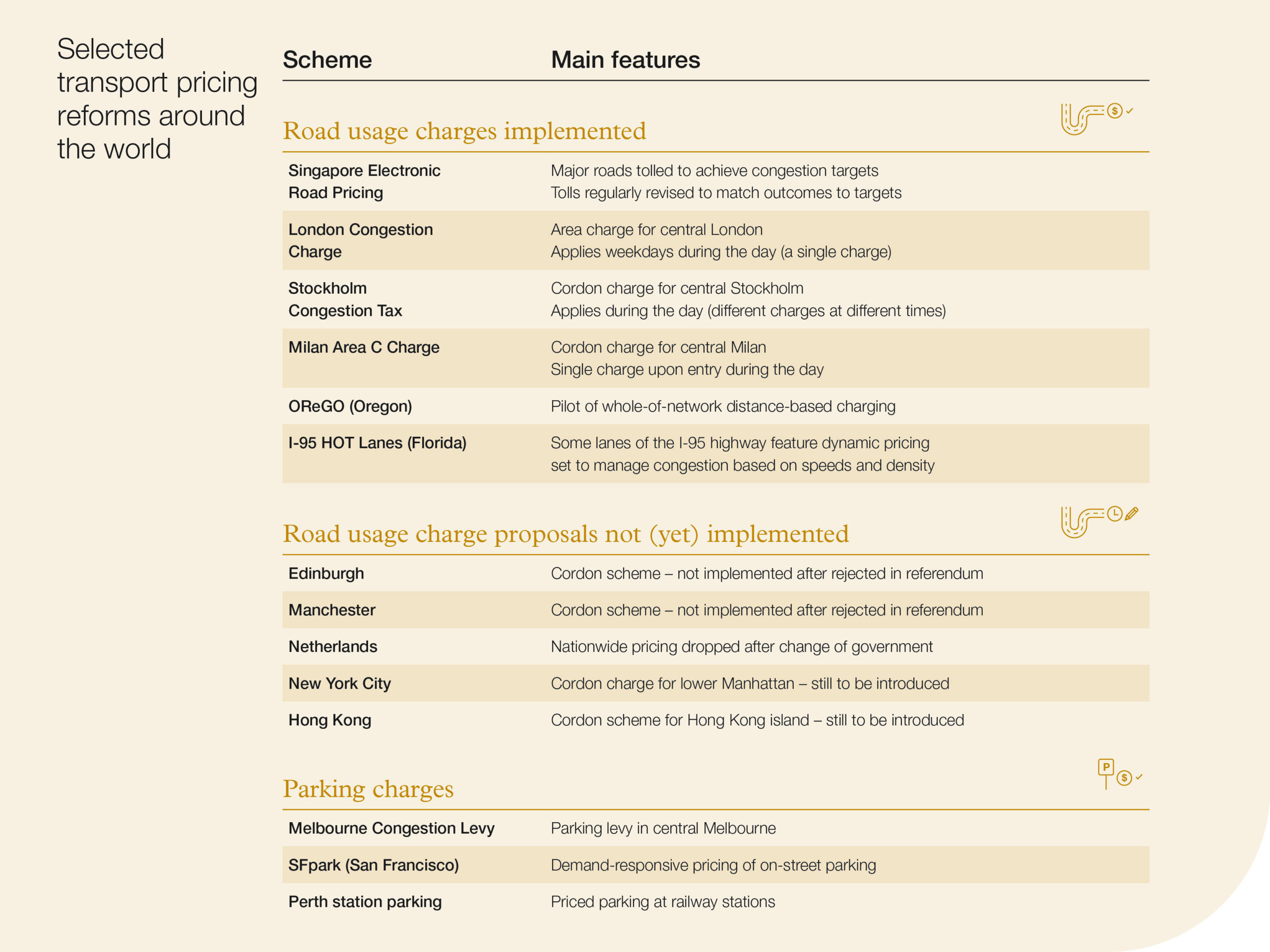 [3] All information provided in this section about the reviewed reforms is from The Road Ahead (Infrastructure Victoria’s 2016 discussion paper about road pricing) or France and Currie (2019) unless stated otherwise
[4] The difference between a cordon and area charge is that a cordon charge is paid only when the cordon is crossed whereas under an area charge a driver is charged if they drive within the cordon, regardless of whether they cross it
[5] Examples include taxis and hire-cars (London), buses and motorcycles (Stockholm)

Results of the reforms

The evidence is clear – congestion charging on roads reduces congestion.

Introducing road user charges in London, Milan and Stockholm has been effective. Despite large population growth in London, congestion had not worsened ten years after the reforms. In central Milan, the first year of the new scheme’s operation saw traffic decrease by 30% and average speeds increase by about 12%. In Stockholm, traffic inside the cordon decreased by about 20% and this has been sustained. As a result of implementing the HOT lanes, the Florida Department of Transport has measured an increase of travel speeds by 200% on the free lanes and up to 300% on the express lanes.

Parking charges have also had an effect. In San Francisco, progress was made over time towards achieving occupancy targets and reducing cruising for parking.[6] The supply of long-term parking places fell following the introduction of the Melbourne Congestion Levy by 2.7% despite growth in employment and office space in the CBD (Victorian Department of Treasury, 2010). Analysis by Infrastructure Victoria (2018) of outcomes after levy increases and an expansion of the levy zone showed more reductions in long-term parking spaces, which meant about 3,900 fewer vehicles in the morning peak. We would need two freeway lanes to accommodate 3,900 extra vehicles at a likely cost of over $1 billion.

Because there hasn’t been an at-scale introduction of more comprehensive road charging, the only evidence on its effects comes from pilots conducted in Oregon and Melbourne. In Oregon, distance charges reduced the amount of driving, including during peak periods. The Oregon pilot included some peak charging in Portland (the largest city in Oregon), which also reduced driving in peak times.

Though it wasn’t an official trial, Transurban’s Road Usage Study of Melbourne, as described in this section, trialled a mixture of location-specific and general charges on a sample of drivers in Melbourne (Transurban, 2016). The report on this study and further independent analysis by Martin and Thornton (2017) revealed some promising results relating to the social acceptance of road pricing and the impacts of different types of road pricing, including on low income Victorians.

How have these different road user charging schemes changed over time? In most cases, there haven’t been many changes. Stockholm and London have made only a few changes to the charges with prices set for considerable periods. Two notable exceptions are Singapore and San Francisco. Charges in these cities are reviewed regularly and adjusted to meet average speed/occupancy targets (Pierce and Shoup, 2013). In San Francisco, while prices could be varied to attempt to achieve parking occupancy targets, minimum and maximum price caps were also set (SFMTA, 2014).

Parking reforms in San Francisco and Melbourne are probably the most successful in terms of being expanded. In 2018, San Francisco’s SFpark system was expanded from a pilot of demandresponsive pricing to operate at full scale, while Melbourne significantly expanded the area covered by its congestion levy in 2015. Singapore has refined its road pricing system and is planning to replace a gantry system with a GPS-based system in the near future.

A recent example of parking pricing reform comes from Perth. In 2014, Perth introduced a weekday flat fee of $2 to park at train stations. People who park at the station can pay using a `SmartParker’ card and must validate their card on the bus or train from the station on the same day to avoid a penalty. This helps stop non-commuters parking at the train station (before the charge, many station carparks were full by 7:30 am on weekdays).

Public transport pricing around the world

Take Sydney, for example. The Opal card (Sydney’s equivalent to myki) charges fares based on distance, time and mode. The greater the distance travelled, the higher the fare. Metro/train and ferries are more expensive while buses and light rail are slightly cheaper. Travel on metro/ train services outside of peak times is also rewarded with a 30% discount. The independent regulator, IPART, sets maximum fare increases across metropolitan and regional transport.[1]

Like Sydney, Tokyo metro fares depend on the distance travelled. Most local trains charge a basic fare, as do some express services.

However, when travelling on Limited Express services (stopping at only major stations) and Shinkansen (bullet train) services, higher fees are charged for the premium service and the reduced journey time.[2]

The London Underground follows a similar principle to charging based on distance, charging by the number of zones travelled. Travel on the Underground between certain zones is also cheaper during offpeak periods.[3]

For an international fare structure similar to Melbourne’s, we can look to Los Angeles. Typical fares are sold as either a one-way two-hour unlimited transfer pass or day passes (1,7 or 30 days) to use across all Metro rail and bus services – similar to myki Money and myki Pass. Premium services like express bus lines do cost more.[4]

The Los Angeles model has also recently integrated bike share into the system, allowing the Metro card to be used to access the docked bike share system.

At its current size and density, Melbourne remains unique with its largely fixed fares. As explored in this paper, this is not always for the benefit of all Victorians.

In 2016 Transurban released a study of usage-based road charging, capturing the responses of 1,635 private light vehicle motorists from across Greater Melbourne (Transurban, 2016).

The study looked at five different user-pays charging systems. These ranged from charging per trip, charging per kilometre and a flat fee. Systems focused on congestion included a cordon charge and a time of day charge – some of the most commonly used charges around the world. These different systems weren’t just trialled on Transurban’s toll roads, but across the whole Victorian road network.

One of the biggest outcomes of the study was the preference of participants before and after experiencing road-user charges. Before the study, 85% of participants were comfortable with the current road funding system in Australia.

After experiencing one of the alternative options for paying, 60% said they preferred shifting to a user-pays system. The issue of privacy and information security was also largely overcome, with participants’ openness to trialling new technology resulting in 84% becoming comfortable with the GPS technology used.

An independent analysis of the MRUS data at the University of Melbourne by Martin and Thornton uncovered more detailed effects of the variety of road user-pays charging systems used in the trial (Martin and Thornton, 2017).

They found that kilometre-based charges can reduce driving, but don’t adequately target congestion. Alternatively, congestion-focused systems such as cordon charges paired with distance-based charges lead to a bigger change in the number of trips taken.

They also found off-peak trips that are non-work commutes were some of the most price sensitive trips. These represented over 80% of the total reduction in trips.