Blaming bike lanes for traffic jams is flawed logic and ignores the lessons of ‘induced demand’.

Understandably, people hate congestion – it’s dead time. As Melbourne’s traffic worsens, more people will look to avoid the city if they feel there is no safe and reliable alternative to sitting in traffic jams.

But if we provide alternatives that get more cars off the road, everyone benefits. For drivers, it means less time in traffic and travelling to the city becomes a better experience. For everyone else, the environmental and productivity benefits are huge.

The return to city offices is just beginning to ramp up, but the good news is induced demand also impacts bike lanes. Some of Melbourne’s cycling networks have seen increased use of up to 300% over the past two years.

Data collected by the Herald Sun last week shows that cyclists already account for one in four vehicles on Melbourne’s streets. (see below media article). This compares to one in five cyclists prior to COVID-19 and one in 20 back in 2007. 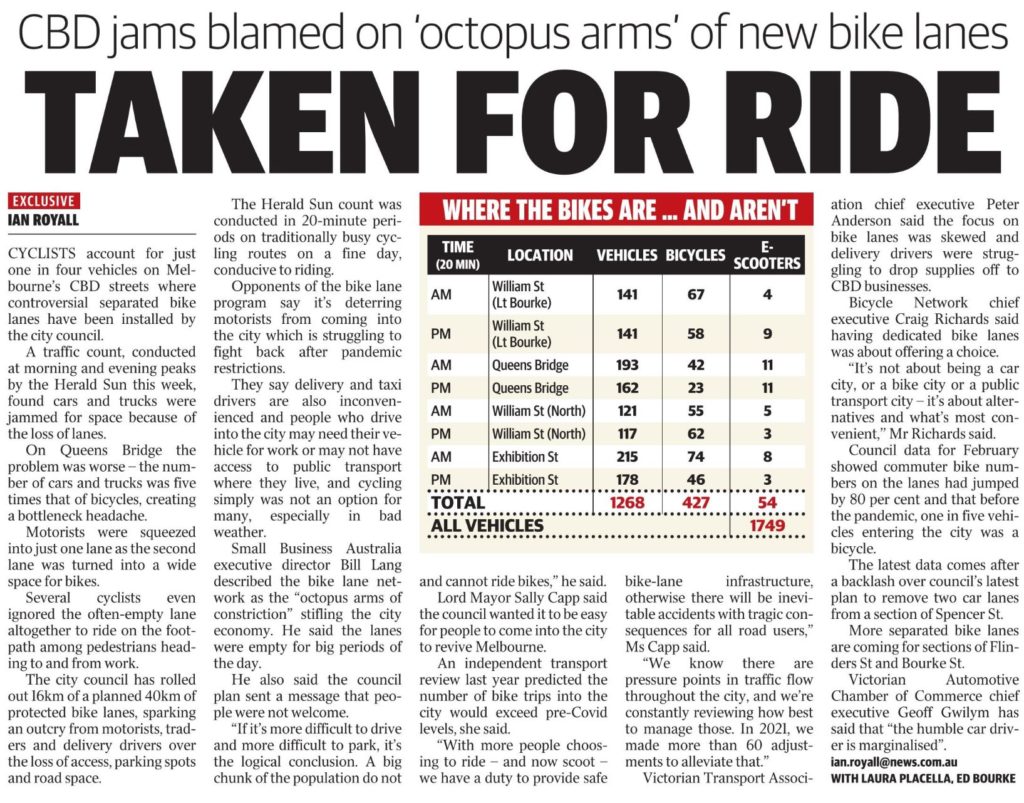 Research shows safety is the number one barrier for people who are interested in cycling, but don’t. Significantly, council data shows an 80% jump in people travelling on protected bike lanes during February, compared with the previous month.

Early in the pandemic we identified the risk of a growing number of city-goers preferring their cars long-term to travel to and around the inner city. This trend has now materialised.

Encouraging people safely back on public transport, combined with a network of separated cycling corridors, will get the city moving again and benefit our economy. Flexible start and finish times, cheaper fares for buses and permanent off-peak travel discounts would go a long way to cut congestion across all forms of transport.

If we don’t make a change now towards safe and more reliable alternatives to car usage, our traffic will keep going in the wrong direction. And that will undermine the city’s revival.

Webinar: Waste and resource recovery – are we making progress towards a circular economy?