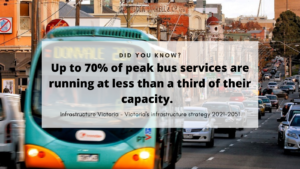 The next time you touch on your Myki, consider this: up to 70% of peak bus services are running at less than a third of their capacity.

Despite this, we charge the same fare for these buses as we do for long distance train commutes during peak hour. The price for a metropolitan, zone 1 or zone 1&2 fare is $4.50 for a two hour-ticket regardless of mode, distance or trip purpose.

That doesn’t stack up economically, nor is it fair – there’s got to be a better way.

And it turns out there is. Public transport networks in cities such as London and Sydney charge fares based on the mode of transport being used (train, tram or bus), and offer discounts in off-peak periods. We think Melbourne should join them.

Charging the same fare for buses as other modes of transport doesn’t add up when you look at the facts behind usage. Our research finds that, on average, bus users are: on lower incomes compared to commuters using other forms of public transport, take shorter trips and use the services mainly to travel for education, shop, or socialise.

Earlier this year, the Victorian Government trialled discounting off-peak fares and increasing off-peak services, to encourage more people back to public transport as well as to support social distancing at peak times. But the trial ended in August.

With restrictions starting to ease and more people out and about, now is a great time to have a conversation about permanently reducing public transport fares to make our transport system cheaper, safer, fairer and more effective.

As the city comes to life again with the return of events like sport, live music and art, and workers gradually return to the office, the reintroduction of off-peak fares and cheaper fares for trams and buses can support our economic recovery while making better use of our transport infrastructure.

Our research finds a permanent shift to discounted off-peak fares and lower fares for bus and trams also results in up to 96,000 fewer car trips per day – which means less congestion on our roads and reduced transport emissions.

Ultimately, reduced bus and tram fares would encourage commuters to make greater use of these underused public transport modes. Our analysis in Fair move: better public transport fares for Melbourne shows that fare reform would result in over 100,000 new off-peak trips on public transport on an average weekday, while reducing peak train trips by over 30,000.

Cheaper buses results in 93,000 additional bus trips, while we also found that tram capacity can be added to the network relatively cheaply, and that lower tram fares reduces car use and eases congestion.

We recognise that for bus services to be more attractive and shift even more people from their cars, service providers will need to offer more than just lower prices.

That’s why we also recommend reforms to bus services that will create more direct and frequent services – improvements which would be supported by the additional passengers attracted by lower fares.

The (B)ins and outs of recycling

Liveable cities a priority
Website feedback
Back to top