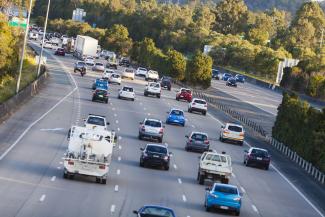 Infrastructure Victoria Chief Executive Michel Masson said the draft strategy combined state-shaping major projects, with improved maintenance programs and policies and reforms which aimed to get the most out of the existing road network.

“We have focused first and foremost on how we can better use our existing infrastructure,” he said.

The strategy identifies a network-wide transport pricing regime to tackle growing congestion on Melbourne’s roads and public transport network as one of the top three priorities for action.

“It will have a more significant impact on congestion than any new road project and is one of the most important actions to be taken by government in the short term.”

The cost benefit analysis released along with the draft strategy found that North East Link and the Outer Metropolitan Ring Road both have strong benefit-cost ratios ranging from 1.4-2.1. Both freeways were found to improve access to middle and outer suburbs and freight efficiency over the long term.

The draft strategy recommends planning to ensure an Eastern Freeway to CityLink connection could be provided in the future, after the analysis indicated this connection was not required in the short to medium term and had a benefit-cost ratio of 0.7-0.9.

“We’ve weighed up all the evidence, and while many projects have merit, it is clear that North East Link is the priority road project,” Mr Masson said.

The recommendations also include policy changes to pave the way for driverless cars, road space allocation changes to prioritise buses, trams and cycling, upgrades to arterial roads, upgrades to regional roads and highways and upgrades to bridges as part of a high productivity freight network.

The draft strategy has been released for consultation before the final 30-year infrastructure strategy is delivered to Parliament in December.

To read the draft strategy and supporting technical documents, or provide feedback, visit the consultation website. The consultation period closes on 31 October 2016.